45,000 visitors in Milan: the success of SMART BUILDING EXPO 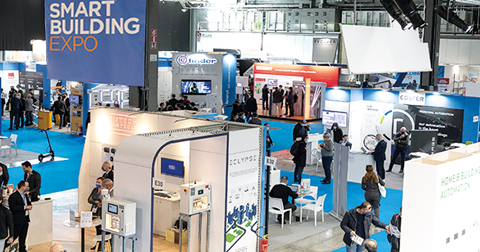 The synergy between the three fairs, for the first time at the same time, has brought 700 companies focused on the world of building. To 2023, always in Milan

Technology, sustainability, innovation of building materials, cyber security, artificial intelligence, digitalization: these are the drivers of the 2021 edition of MADE expo, SICUREZZA and SMART BUILDING EXPO, which registered 45,516 professional visitors.
The three events, for the first time in conjunction, through the more than 700 total companies present, gave a 360-degree view on materials, technologies, regulations for the building and urban environment, as Luca Baldin, event manager of SMART BUILDING EXPO, points out:

“A success that was anything but predictable, with significant numbers that testified to the ability of our exhibition to be a fundamental element in the integrated offer that sees us side by side with MADE Expo and SICUREZZA. Today, with the confirmation of this contemporaneity in 2023, we can say without fear that we have created the reference event at national level, and one of the main ones at international level, for innovation in construction and our cities, in other words, one of the strategic areas of development in the coming decades”.

SMART BUILDING EXPO showcased the best of the solutions and systems that make the building and the city smart. Artificial intelligence, deep learning, integration between technologies that become components of highly advanced platforms for the management of the house and the entire building, benches that are transformed into tools for charging bikes and electric scooters, but also in islands of welcome and protection, where video surveillance and sound system allow to get in touch immediately with the police in case of danger: on display, there were the fruits of research and development of a sector that in these two years has never stopped, but has actually contributed to the return to the new normalcy.

“These concurrent events all had a common denominator: the positive response from the public and companies,” says Luca Palermo, CEO and general manager of Fiera Milano. “Exhibiting companies reported that visitors to the three events were of high quality. The presence of international visitors was also significant, with 94 countries represented during the days of the show. Finally, success also for the contemporaneity of the fairs. The purpose of working as a team, enhancing the potential synergies of supply chain and content, was largely achieved. We live in an era of ever greater interconnection between sectors and trade fairs must increasingly play the role of accelerators of business opportunities, also by promoting these connections”.

Connections have developed mainly through the rich schedule of events. More than 150 training meetings have been held these days: from the sustainability of renovation to cyber security, passing through professional certification, regulations, the evolution of the smart city, and topics related to incentives, super bonuses, and benefits. All appointments were a confirmation of the role of the fair as a business moment, but also as a training hub able to interpret the evolution of the market.